The origin of the Dutch surname Wagenbuur

On Saturday the 11th of May in the year 1839, the Major of Yzendyke, a small town in the Dutch part of Flanders, Mr. Jacobus Brevet used the name "Wagenbuur" for the very first time in an official paper. He did so in the birth certificate of Johannes Franciscus Wagenbuur, who was born one day earlier in that same town of Yzendyke. 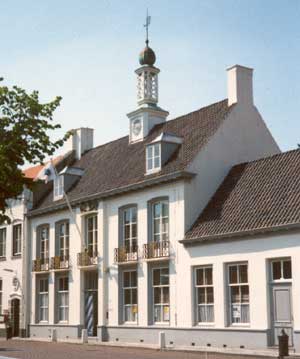 The former town hall of Yzendyke in 1992. Here the surname Wagenbuur was used for the first time, in 1839.

The name major Brevet should have written down was "Quaegebuer". But as a Dutchman he apparently didn't know that originally Flemish name. In doing so, he unintentionally created a new Dutch surname, a simplified Dutch version of the original Flemish name, that sounds alike, but is very different in spelling.

The father who came to town hall to get his child registered, was called Francies Quagebuur. He got his surname from his (unmarried) mother. It was already somewhat simplified, compared to the spelling of his grandfathers surname, who was used to be called Carolus Quaegebuer. At the time Francies Quagebuur had an aunt Catherina, who was the only sister of his late mother. She lived in the nearby village of Schoondyke, and her name was still spelled as Quaegebuer.

Catherina Quaegebuer, aunt of Francies Quagebuur who's name kept the original Flemish spelling, even in 1839, also in Dutch Zeeuws-Flanders.

But in the before mentioned birth certificate of May 1839 the surname was changed dramatically. Francies Quagebuur however, may never have noticed. He was not able to read or write and when the major read out the certificate he will not have heard the major called him Franciscus Wagenbuur in stead of Francies Quagebuur. How ever unlikely this may seem, in Dutch pronunciation that is almost the same! And even if he would have heard, it is highly unlikely that an illiterate working man would have dared to correct the major of a small town. In this birth certificate of 11th May 1839 the surname Wagenbuur
was used for the very first time.
(click on the picture for a much bigger version)

But this mistake didn't change the surname in one blow. Francies Quagebuur kept calling himself just that. The population registers in Dutch Zeeuws-Flanders show how difficult the originally Flemish name was for the Dutch authorities. Different registers show different spellings: Kwaadgebuur, Kwagebuur or Quagebuur. But not one population register shows the version Wagenbuur.

Only when another birth certificate had to be drawn up, on Friday 4th of December 1840, because of the birth of the second son of Francies, the name Wagenbuur appears in writing for a second time. But as this was in another town, it is likely that Francies brought an excerpt of that first certificate, when he came to register this second son, Jacobus Frederik Wagenbuur, who was born on the 3rd of December 1840. Then, the major of Schoondyke, that is near to Yzendyke, also wrote down Wagenbuur.

But this still didn't change the name for good. The population registers keep showing the family under (mostly) the name Kwaadgebuur.

Entry in the population register of Yzendyke 1842-1844

Even major Jacobus Brevet of Yzendyke uses that version when he has to draw up another certificate for Francies Quagebuur. This time his marriage certificate. On Thursday 10th November 1842 Francies marries the mother of his two sons, Maria van Damme. That they only marry after they had two sons, had to do with the fact that they were very poor. They had to get a permission to marry free of charge first. The major probably had no idea that he used the surname Wagenbuur three and an half years earlier. But whether that would have influenced him is unclear, in the supplements with the marriage certificate we can find the marriage licence. In this licence, that he himself wrote, just one month earlier, we can clearly see the name Francies Quagebuur!  Still, mr. Brevet chooses to write down Franciscus Kwaadgebuur this time.

The name Wagenbuur not in use

Both their sons, no older than 8 and 7 years of age are orphans then. And even though their surname is stated as Wagenbuur in both their birth certificates, they are entered as Jannis Quagebuur and Jacob Quagebuur in the population register of Schoondyke by the poverty board, the surname of their father.

Entry in the Population Register of Schoondyke (1830-1861) under the caption: "persons belonging to the poverty board, being without parents or legal guardians".

From the poverty board they are transferred to the Vuijser-van Damme family around 1850. To a sister of their mother and her husband and children, in the nearby village of Groede. Their names appear as Johannes and Jacobus Kwagebuur in the population register of that village. So also their aunt knew they should have been called like that, at least as far as the pronunciation was concerned. Their official name Wagenbuur is still not used.

Entry in the Population Register of Groede (1850-1855). The names are crossed out because they later left the village again.

Only after both boys join the Royal Navy, the switch to their official name takes place. For the eldest that is in 1855 and for the youngest in 1860. The naval archives must have taken the names from their birth certificates and not the names the boys must have used themselves. Which -from a bureaucratic point of view- is correct of course. 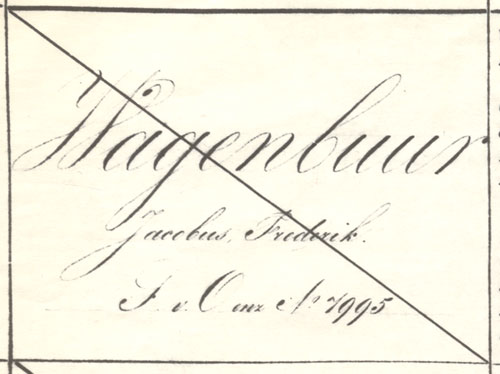 Entry in the books of the Royal Navy 1860-1868: Jacobus Frederik Wagenbuur. Name crossed out because of his decease in 1868.

The youngest son died during his service, at only 28 years of age in the former Dutch East Indies, in a military hospital in Surabaya, now in Indonesia. No death certificate was made for him, but a difference with his fathers last name would not have been detected, and it would have stated Wagenbuur, without any doubt.

"naamverschil", 'name difference' in the marriage certificate of Johannes Franciscus Wagenbuur because of the different family name compared to his father.

When in 1918, after this Jan Wagenbuur dies too, his death certificate is written out, the name of his father Francies Quagebuur is mentioned for the last time. But because his son is officially called Johannes Franciscus Wagenbuur, in this certificate Francies suddenly appears as Franciskus Wagenbuur.

After a study of all the official sources still available, we can conclude that the name Wagenbuur exists since the 11th of May 1839, but is really "in use" since the enlisting in the navy of Johannes Franciscus Wagenbuur in 1855. Wagenbuur is a surname of about 150 years because of that. Both sons of this Johannes Franciscus Wagenbuur, who were born in 1865 and 1866 in Amsterdam respectively, were actually the first persons who had no difference in their own surname and that of their father.

Number of persons with the name Wagenbuur, in absolute figures

In 2007 the geographical occurrance of people that were born with the name Wagenbuur is as follows:

In 2007 the geographical occurrance of people that use the name Wagenbuur is as follows: