The life of Jacob Quagebuur/Wagenbuur

Jacob was born on the 3rd of December 1840, in a very severe winter, in a village called Schoondijke which is in Dutch Flanders in the Province of Zeeland. In his birth certificate his name was stated as Jacobus Frederik Wagenbuur. That last name probably stems from the birth certificate of his elder brother, who was born one and a half years earlier. His parents were the very poor day labourers Francies Quagebuur and Maria Theresia van Damme, who were not yet married. 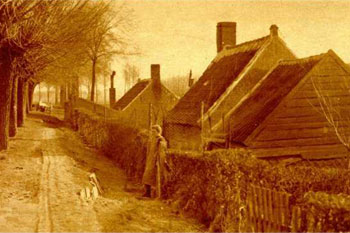 When Jacob was nearly 2 years old, his parents married; free of charge because of their poor financial state. A little over a year later, in January 1844, another severe winter, his father already died. Also in January, but four years later, in 1844, his mother died as well. Jacob, barely 7 years old, stayed behind as an orphan, with his elder brother Jannes.

"Persons belonging to the Poverty Board,
and who are without parents or guardians".

Because there were no close relatives in the village, he and his brother were cared for directly by the local Poverty Board of Schoondijke. There was an aunt of their late father in a nearby village, but she already took care of their father when he became an orphan, and now she had a large family of her own and grand children. So she didn't become the guardian for them as well. Although both boys actually have the last name Wagenbuur, in the village's record they appear under Jannes and Jacob Quagebuur, their father's last name. 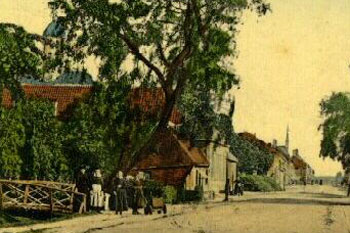 However, in the register there was one word written in pencil under "remarks about temporary absence"  the name of the village "Groede". Further investigation showed that both boys were entered in that village's register as well! They appear under the family Veuster-Van Damme, of which the wife was a sister of their mother. The boys are now called "Kwagebuur".

Entry in the population register Groede,
Kwagebuur Johannes and Kwagebuur Jacobus,
crossed out because they later left the village again.

The register doesn't show a date of arrival but it does state their leave: 4 May 1854. So it appears they were in custody of the Poverty Board for some time, but also of their aunt of mothers side as well. 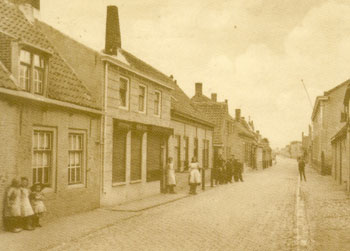 Groede: here Jannis and Jacob spent some years with relatives of mother's side.

How the boys spent their lives in Groede is unknown. They didn't go to school probably. From the elder brother it is certain that he never learned how to read and write. They probably had to earn their living by working for the local farmers, as their parents did before them and also their aunt and uncle where they now lived did.

In May 1854 Jacob's elder brother registers in the navy. Jacob left his family too, according to the register. But as Jacob joins the navy almost seven years later, he must have spent those years in Schoondijke again. On the 1st of April 1863 his term is prolonged with another four years (although the first term wasn't over yet) and he gets 40 Guilders for doing so. On the 22nd of September 1864, Jacob, who in the naval archives is correctly called Wagenbuur, arrives in the Dutch East Indies, with the ship "Helden" (Heroes). Jacob doesn't know then, that he will never leave. 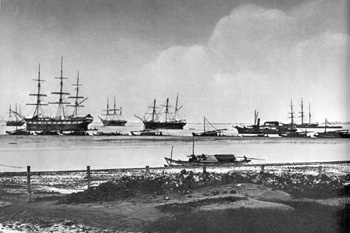 Life for an ordinary soldier in the Dutch East Indies is supposed to have been very dull. (According to the book: Tempo Doeloe - the old Indies) A soldier was not allowed to be married and he couldn't afford a "housekeeper" from a wage of 35 cents a day. Especially the younger soldiers turned to prostitution and drinking. Dutch Jenever or, even more cheap: arak, tuwak, or sagoweer. It was not much more of a hopeful life than he had as an orphan in Dutch-Flanders. On the 14th of November 1867, at the age of 26, Jacob Wagenbuur took part in "the battle against the rebellious people of the kampong (compound) Balanipa in the Mandhar Empire". This compound is on the Isle of Sulawesi (at the time called Celebes).

Site of Balanipa, where Jacob took part in a battle.

It is unknown whether Jacob got hurt in Balanipa, the military records do not state that, but a little over one year later he was in the military hospital of Simpang, at the time near, and now in Surabaya. Simpang road in Surabaya (Photo of about 1917).

"Simpang, town in the East-Indies, on the Isle of Java, residence, 4 posts [6 km] of Surabaya, where one can find beautiful country houses and manors of some citizens of Surabaya.
There is also a first rate and beautiful military hospital where at least 400 patients can stay and enjoy an excellent treatment"

Medical care was not very developed in 1868, operations in the former Dutch East Indies regularly took place outdoors (for better lighting) and for an audience. Physicians wore ordinary clothes and were assisted by untrained servants. 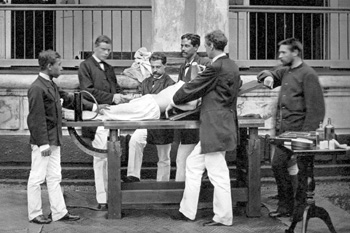 Example of an operation in the garden of a military hospital
in the former Dutch East Indies. Photo of around 1888.

The naval archive does not reveal what the illness or injury of Jacob Wagenbuur was, it merely states that, three days after his 28th birthday, he "died on the 6th of December 1868 in the Simpang hospital". The entrance of the Simpang hospital, where Jacob died on 6th December 1868.
This picture is from around 1927. After the independence of Indonesia (1948) the hospital was moved and this building removed.
(Source: website Christian University Petra, Surabaya Indonesia).